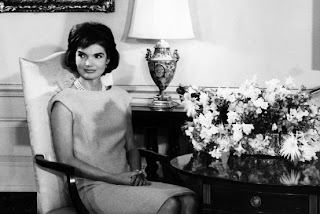 Found this from the Wall Street Journal. LOVE that they quoted our very own Tina Stoecker, AIFD, in the article!

The link to the article is here:

Nancy Clarke, the longtime chief florist at the White House, plans to retire May 29, but not before she helps Michelle Obama incorporate her personal style into official floral designs.

Flower arranging at the White House has taken a more modern turn since the Obamas moved in, Ms. Clarke says. “They are more youthful…so we gear things a little bit younger. A lot more color, brighter colors, happier colors,” she says.

Ms. Clarke, 64, says she is retiring to spend more time with her family. Her three-person staff will temporarily run the White House flower shop until the social secretary’s office names her replacement.

Fresh flowers, often symbolizing conspicuous consumption, are tricky in times of economic crisis. Ms. Clarke says she has been using long-lasting ferns, grown in a nearby National Park Service greenhouse, in lieu of more expensive arrangements. After a recent luncheon, Ms. Clarke’s staff plucked flowers out of arrangements and put them in a refrigerator until they could be recycled on staffers’ desks.

For 30 years and six administrations, Ms. Clarke has worked in the White House flower shop, a cozy, sunny room around the corner from the kitchen on the ground floor. Starting at the White House as a volunteer in 1978, she now oversees flowers placed throughout the private residence, the Oval Office, public rooms, hallways, workspaces and Air Force One and Camp David, when they’re in use.

Last Monday, hours before President Obama joined Mexican Ambassador Arturo Sarukhán at a Cinco de Mayo party on the State Floor, Ms. Clarke put finishing touches on arrangements of three types of hydrangea, sunflowers and curly willow in copper urns. White House Social Secretary Desirée Rogers had approved the arrangements before the event. Nancy Clarke “has created beautiful pieces and has become part of the family of staff that we have here,” Ms. Rogers said in a statement. 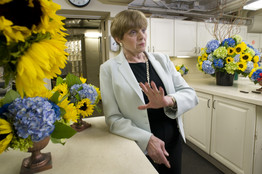 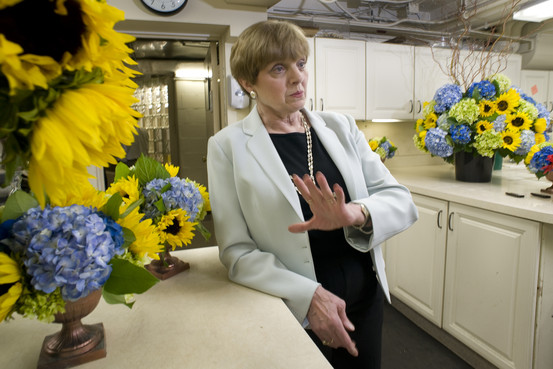 The White House began using fresh flowers in place of wax ones in the late 1850s, when James Buchanan’s niece, Harriet Lane, returned from a trip to England, where fresh blooms were in vogue. Ever since, the White House has employed bouquet makers. “In the early days, a man with a cart on bicycle wheels would wheel around and water everything,” says William Seale, author of the history “The President’s House.”

First ladies have used flowers to put their stamp on social functions. Jacqueline Kennedy liked opulent, French-inspired arrangements and experimented with vegetables. Nancy Reagan had a strong preference for Venus peonies in soft, blush colors, even when they weren’t in season. “I used to say, ‘Mrs. Reagan, peonies bloom in May,'” Ms. Clarke recalls.

Barbara Bush, an avid gardener, loved loose, natural-looking arrangements with lavender, bluebells and blue pine. Hillary Clinton had an affinity for tropical flowers, such as birds of paradise and pincushions. Laura Bush had more classic taste and often used the ornate pieces from the White House antique vermeil collection. 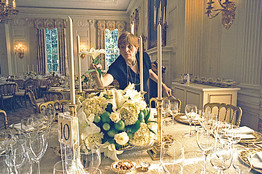 Before a 2001 state dinner, Ms. Clarke put the last touch on a centerpiece of hydrangeas, white lilies, white roses and limes. 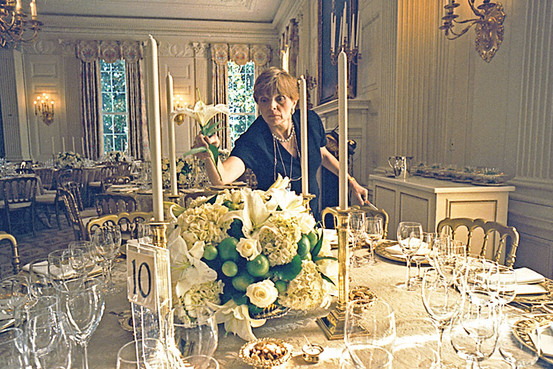 Presidents have weighed in. Bill Clinton loved ambiance roses, a popular variation with red petals and cream-colored interior, and would request them for summits and small dinners. George W. Bush liked a bowl of peach roses on the Oval Office coffee table. “We decided to change it to red one day,” Ms. Clarke says. “That lasted about five minutes.”

Some people in flower design worry that too much modernism will detract from the period elegance of the White House. Robert Isabell, the Manhattan florist who did Caroline Kennedy’s wedding, Jacqueline Onassis’s funeral and the White House NATO summit in 1999, says White House flowers should maintain a certain traditional look. “I don’t know if a clear vase or something you’d see in hotels is appropriate for the State Room,” he says.

But the Obamas’ edgier tastes are welcome news to others, who say White House flowers could use an update. Tina Stoecker, president-elect of the American Institute of Floral Designers, says she hopes to see more loosely arranged designs, using bright greens and Fuji chrysanthemums, to replace the traditional floral structures. “It’s always been ostentatious masses of flowers,” Ms. Stoecker says.

“It’s time to shake things up a bit,” says New York designer David Beahm, who helped with White House events during the Clinton Administration. He envisions bright, symmetrical designs of locally-grown flowers arranged in some of the antique vases in the White House collection.

Write to Amy Chozick at amy.chozick@wsj.com 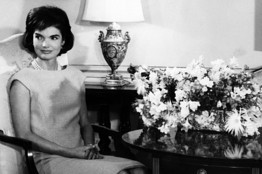 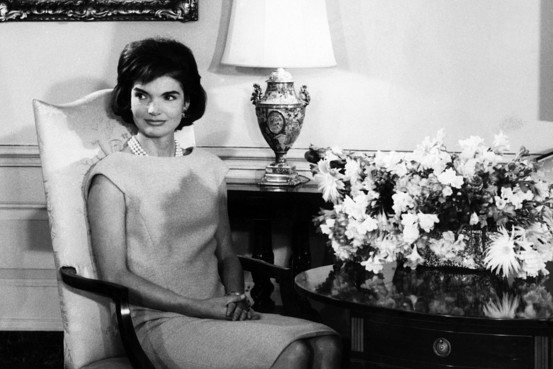 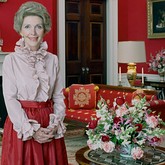 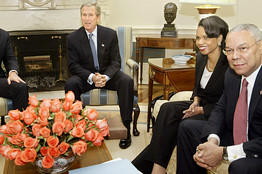 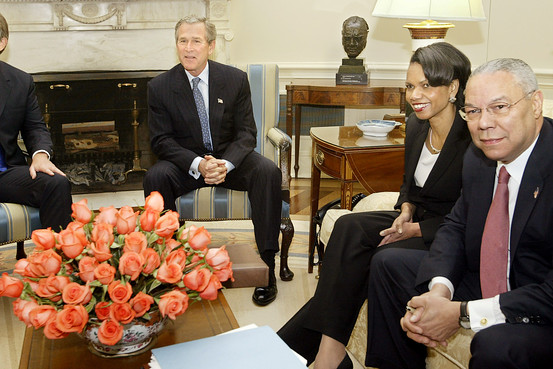 Why you should not carpet your stairs