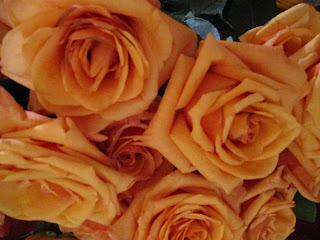 Valentines Day
(or ValloWeen as its affectionately referred to by some florists)
Hence, the orange roses…
The days before the 14th are upon us.
For men, its filled with panic
“What does she REALLY want”
For women, its filled with expectation
“I hope he does something very romantic”
For florists, its filled with…..__________(I’ll let you fill in the blank.)
That blank all depends on experience, attitude, aptitude.
At any rate
Florists’ phones are ringing.
Fresh floral availability is tighter than its ever been in YEARS.
Prices are up (its a matter of supply vs. demand, not greedy florists)
For THIS freelance florist, its filled with anticipation, a little bit of trepidation,
a lot of vitamins, good shoes and a healthy diet.
You may wonder
“What IS a freelance florist”
Well, we are the troops that get called in when volume is high.
For weddings, special events, and in this case, a holiday.
Here’s what Wikipedia has to say about freelance:
The term was first used by Sir Walter Scott (1771–1832) in Ivanhoe to describe a “medieval mercenary warrior” or “free-lance” (indicating that the lance is not sworn to any lord’s services, not that the lance is available free of charge). It changed to a figurative noun around the 1860s and was recognized as a verb in 1903 by authorities in etymology such as theOxford English Dictionary. Only in modern times has the term morphed from a noun (a freelance) into an adjective (a freelance journalist), a verb (a journalist who freelances) and an adverb (she worked freelance), as well as into the noun “freelancer.”
So that’s what I am, willing to take up the cause for a fellow florist.
A medieval mercenary warrior!
To lend support, strength, to serve.
Freelance work is very satasfying.
Its exciting to experience the different ways florists do their thing…
Make the world more beautiful.
Express emotion.
Show affection.
We deliver more than flowers, you know!