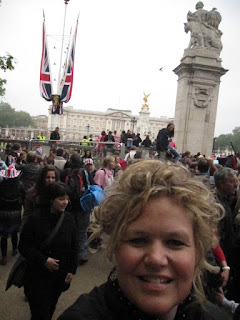 ROYAL WEDDING RECAP
After a whirwhind, 3 week trek across Paris, Scotland, and England,
it culminated with a big party in the streets of London.
THE. ROYAL. WEDDING.
Imagine my delight when I learned that a photoshoot with Fusion Flowers could coincide
with the big wedding!
As an American florist from Southern Illinois,
I was thrilled to witness history in the making.
(And hoping for a glimpse of the flowers!)
My friend Wendy Andrade and I arrived early in the morning. 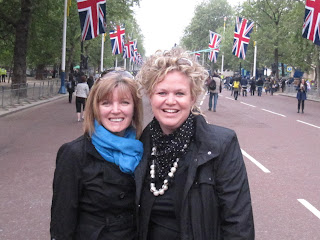 After scoping out the route and consulting with a London Police Sargent
who is a personal friend of the Andrades,
we decided to go to the Horse Parade Grounds. 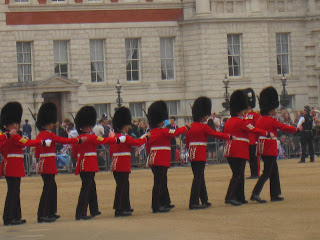 The outside corner provided sweeping views of the approach and departure for the motorcade.
It was a good choice.
Celebratory music played over speakers
and allowed us to eavesdrop on the happenings in Westminster Abbey.
Listening to the beautiful music and lovely service was a delight.
I watched children cheer, British women wipe tears,
and there was lots of flag waving.
We followed along in the program and sang the hymns.
IT. WAS. AWESOME. 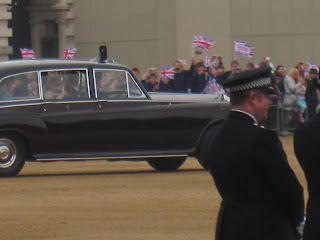 We managed a few pictures. 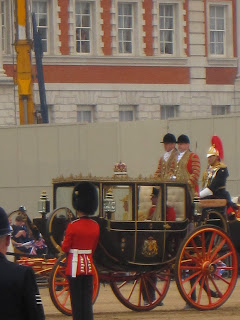 Juggling a flip video, a camera,
and my suffering cell phone!
(Which is another story in itself…..vodaphone service was bogged down…my poor phone’s full battery was depleted in record time, which nearly sent me into a full scale panic attack…)
Not to worry!
This midwestern gal was in London, where the motto is
“KEEP CALM AND CARRY ON”
So carry on we did.
Once the bride and groom passed us in the carriage and the motorcade had moved on,
we flew over to Westminster Abbey.
We arrived in time to see
VIP’s leaving. 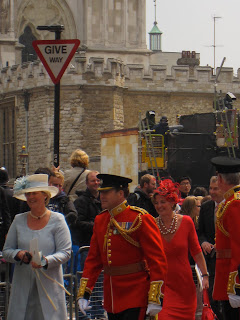 These folks were important enough to get a wedding invite, but not a reception invite.
Important enough to be in the abbey,
but trudged out to the street with the rest of us.
And the SHOES!
These women did not consider that their 5″ spike heel/platforms would have to navigate cobblestone streets.
Some looked like children wearing their mothers shoes.
It was hilarious.
We ducked into the Central Hall of Westiminster, which is a Methodist church that was a headquarters for the media.
They had a great cafe where we grabbed lunch.
In the grand hall, they had huge TVs set up,
so we got to watch the kiss!
*sigh*
Then we attempted to get into the abbey.
Not until the next day.
Oh well!
So we enjoyed the sights and sounds of the streets.
The mood was light and celebratory.
It was lovely.
On our walk back to the train station, we grabbed a paper the chronicled the day’s events.
There was a huge cart still in bundles, the street vendor slicing through the straps.
As Wendy handed me a copy, it was damp in my hands.
Talk about hot off the press!
History in the making, indeed.
So this Southern Illinois florist returns home today.
Back to my family.
My brides and other clients.
Back to my flood and storm ravaged state.
I am taking with me
the memories of a lifetime.
Friendships that are deep and abiding.
Hopes than transcend an ocean.
Ideas and dreams.
Tender moments.
Sparks of inspiration.
Lots of blisters.
Shoes with the heels worn down from all the walking.
Blistered & calloused feet.
Entirely too much luggage.
Tokens and gifts.
And a few Advil PMs from my friend John Hosek, so hopefully I can sleep on the flight home!
There have been so many moments on this journey
that have moved me to tears.
I explain it by saying
“Sometimes my heart leaks from my eyes”
Its true.
So me and my leaky eyes are going back to the USA.
These eyes have seen much.
This heart has felt even more.
This florist had a tremendous trip.